Everest Three Passes Trek is one of the most strenuous treks of the Khumbu region as you will be crossing three challenging high passes. Beside, begin the most challenging trek of the Everest region, Everest High Passes Trek is also one of the most popular treks of this region. This trek is perfect for trekkers or mountaineers who love to have thrilling adventures and wanted to cover almost all the Khumbu region at one trekking expedition. Everest High Passes Trek is also known as Everest Circuit Trek or Everest High Passes Trek and incorporates Lower Khumbu, Cho La Pass, Renjo La Pass, and the Everest Base Camp. Hundreds and thousands of travelers visit this region every year to go on this trip to see stunning views of snow-covered Himalayan mountains and spectacular sceneries.

The Everest Three Passes Trekking is not only about its beauty, but you will also get an opportunity to experience and observe the lifestyle, culture, and tradition of legendary Sherpa’s. You will spend quality time in Namche Bazar (3,440 m) and Khumjung Village (3,790 m) interacting with the local people, tasting the local food, visiting cafes, restaurants, bookstores, along with observing locals lifestyle and culture. Likewise, you will also visit the Tengboche monastery, the largest monastery of this region. During your Everest Three Passes Trek, you will get to witness panoramic views of Mt. Everest (8,848 m), Mt. Makalu (8,481 m), Mt. Lhotse (8,516 m), Mt. Ama Dablam (6,812 m), Mt. Nuptse (7,861 m), Island Peak (6,189 m), Mt. Pumori (7,161 m), and numerous other mountains.

Everest Three Passes Trek begins from a thrilling flight to Lukla from Kathmandu. From Lukla, you will ascend to Namche Bazar via Phakding. You will rest for a day in Namche Bazar and explore around. Further, you will head towards Lobuche en route Tengboche, Dingboche, and Chhukung. Also, before reaching Lobuche, you will cross Kongma La Pass. The next day, you will wake up early in the morning and trek towards Everest Base Camp.

After spending some time at the EBC, you will return back to Gorak Shep for a night stay. You will then hike to Kala Patthar's viewpoint from where a 360-degree of Everest as well as the surrounding mountain can be seen. Later, on the same day, you will ascend to Dzongla. Crossing another pass, Cho La Pass, you will reach Gokyo Lake. You will spend an acclimatization day in Gokyo Lake and hike to Gokyo Ri for spectacular views of the surrounding. From here, you will cross one more pass, Renjo La Pass, and trek down to Lukla to fly back to Kathmandu.

Everest Three Passes Trek is a strenuous trek. As its name tells by itself, Everest Three Passes Trek, which means you will cross the three most challenging pass of this region. Besides that, you will trek on several steep rugged, and glacial paths. Therefore, to go on this trek, you have to be physically and mentally strong with past trekking experience.

Due to global warming, the weather in the mountain and hilly region has changed unusually. Because of this, we are facing some problems with bad weather, heavy rainfall, landside, highway blocked, flight delayed, or even canceled for a day. Sometimes because of the road traffic, we couldn't arrive on time. It may happen at any time of the year because we can't predict the weather condition and other situations. Therefore, if possible, we would like to suggest adding an extra supplement day before your international flight. If everything is going well, you have a beautiful day to visit any interesting place in the historical city

Ram wasn't my guide but we met when I was doing my Three Passes Trek. I noticed how knowledgeable he was about the mountain and attentive he was with his client. He made sure everyone around him was looked after in the mountains and continued to help out in Kathmandu when I was stranded in 2020. He even welcomed me for a meal at his home and met his family. I'll definitely be returning to Nepal and booking a tour with Ram. 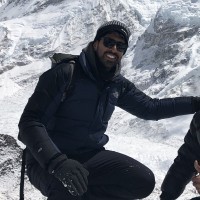 Ram was recommended to me by a trekking company in Kathmandu as one of the top guides in the area. I am so glad that I got to trek to Everest Base Camp with him! His knowledge of the mountains, great sense of humor, and caring personality made the whole experience truly incredible. He took the time and effort to teach common phrases in Nepali, talk about the history and culture of various ethnic groups in the area and made sure I was feeling well throughout the trek. At every village we passed, Ram would greet the locals like they were his siblings, a trait that had restaurant and hotel owners making sure our group's needs were a priority. Although the end of our trip was complicated by the COVID-19 pandemic lockdown, Ram made sure I was on the list to be evacuated out of the mountains. He is a true friend and I could not have asked for a better experience in Nepal.